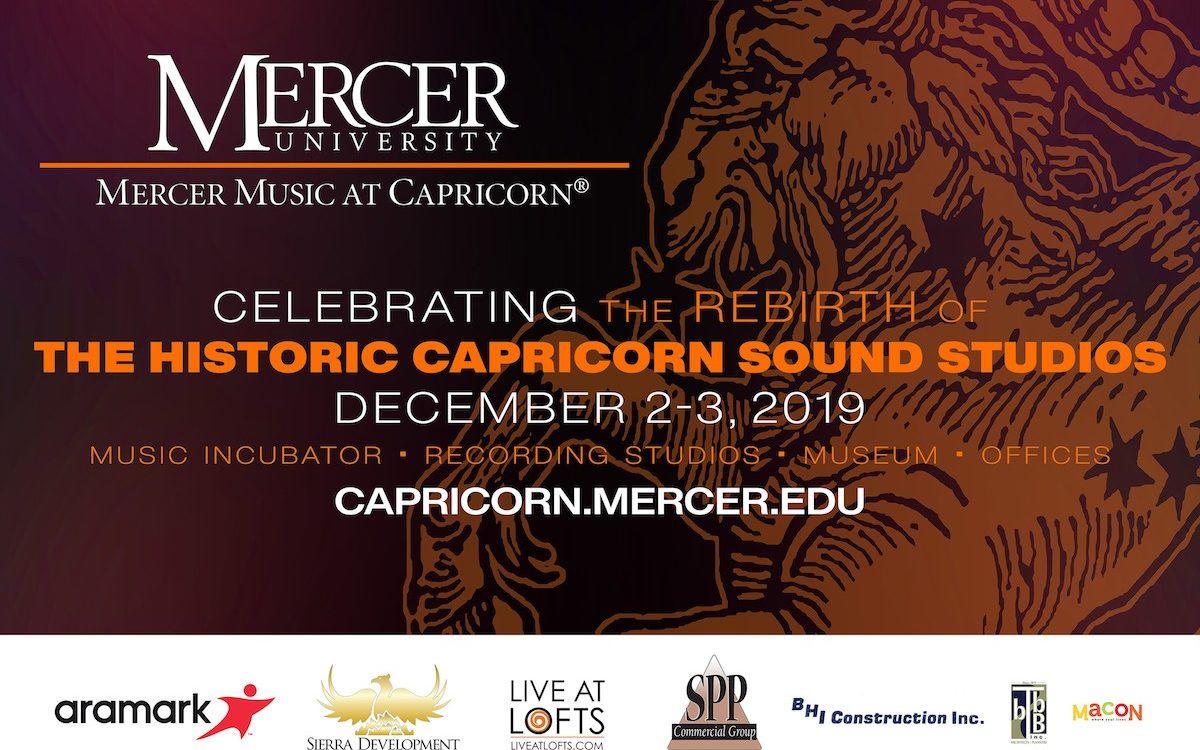 Otis Redding bought the complex with the Walden Brothers in 1967.

MACON – Mercer University is planning a series of programs and events Dec. 2-3 to celebrate the rebirth of Macon’s historic Capricorn Sound Studios as Mercer Music at Capricorn, including opportunities for the public to get its first look at the restored facility that captured and defined the 1970s Southern Rock sound.

Festivities kick off on Dec. 2 with a VIP party for donors and other invited guests. Food, beverages and tours of Mercer Music at Capricorn, plus music by the Randall Bramblett Band, will be on tap from 6 p.m. to 9 p.m. Donors who make contributions of $1,000 or more to the project will receive invitations to the event. Gifts may be made online at capricorn.mercer.edu.

A public ceremony will formally re-open Mercer Music at Capricorn on Dec. 3 at 2 p.m. The program, which is free and open to the public, will take place on an outdoor stage behind the studios and will feature music by Mercer’s Robert McDuffie Center for Strings and the Otis Redding Foundation’s DREAM Choir, as well as remarks from Mercer President William D. Underwood and other special guests. At the conclusion of the brief program, the stage and tent will transition to a concert venue with music by former Wet Willie lead singer Jimmy Hall and Friends. Following the 45-minute set by Hall, Mercer Music at Capricorn will be open for free tours. The live music will continue inside the studios until 6 p.m. with performances by the Robert Lee Coleman Band, Chris Hicks from the Marshall Tucker Band, Magnolia Moon and Caleb Melvin of Hindsight, all artists and bands with Macon roots.

The re-opening celebration will be capped off at 8 p.m. with a ticketed Capricorn Revival concert at the Macon City Auditorium featuring former Allman Brothers Band member and current Rolling Stones music director Chuck Leavell, Randall Bramblett Band, and a host of other former Capricorn artists or musicians who have been influenced by Capricorn. The lineup includes Jimmy Hall from Wet Willie, original Allman Brothers Band member Jaimoe, as well as Taj Mahal and former Capricorn recording artists John Bell of Widespread Panic and Tommy Talton of Cowboy. Others scheduled to perform include Charlie Starr from Blackberry Smoke, Marcus King, Brent Cobb, and Duane Betts of the Allman Betts Band. Additional artists will be announced at a later date.

Tickets for the Capricorn Revival concert range from $58 to $128 and will go on sale at 10 a.m. on Oct. 11 through Ticketmaster.

Building on the studio’s legacy, Mercer Music at Capricorn is a multi-purpose, 20,000-square-foot complex designed to leverage Macon’s music heritage to create Macon’s music future. It contains the fully restored historic recording studio, plus an additional, larger studio suitable for orchestral recording and film scoring, as well as live performances. The facility also features 1,200 square feet of interpretive space that tells the story of Capricorn and Macon’s music history through artifacts and interactive digital exhibits.

The heart of the project is a music incubator featuring 12 rehearsal rooms of various sizes to facilitate the development of music talent. The incubator will be available to musicians 24 hours a day, seven days a week.

Offices and meeting spaces for related arts and cultural organizations, businesses and creative professionals are located on the second floor of Mercer Music at Capricorn.

The building – actually four historic structures that were assembled into one complex – that would become Capricorn Sound Studios was purchased in 1967 by Redwal Music, a company founded by Mercer graduate Phil Walden, his brother Alan Walden, and Otis Redding, whose career was beginning to take off. Redding’s untimely death later that year deferred the studio’s opening to 1969, when Capricorn Records and the Allman Brothers Band were established in Macon. Over the next decade, the studios produced hits by talented artists including Gregg Allman, Dickey Betts, the Marshall Tucker Band, Livingston Taylor, the Charlie Daniels Band, Wet Willie, Bonnie Bramlett, Elvin Bishop and many others.

The $4.3 million renovation project is being funded by historic tax credits, major grants from the Peyton Anderson Foundation and John S. and James L. Knight Foundation, and gifts from businesses and individuals.

For more information on Mercer Music at Capricorn, visit http://capricorn.mercer.edu/.