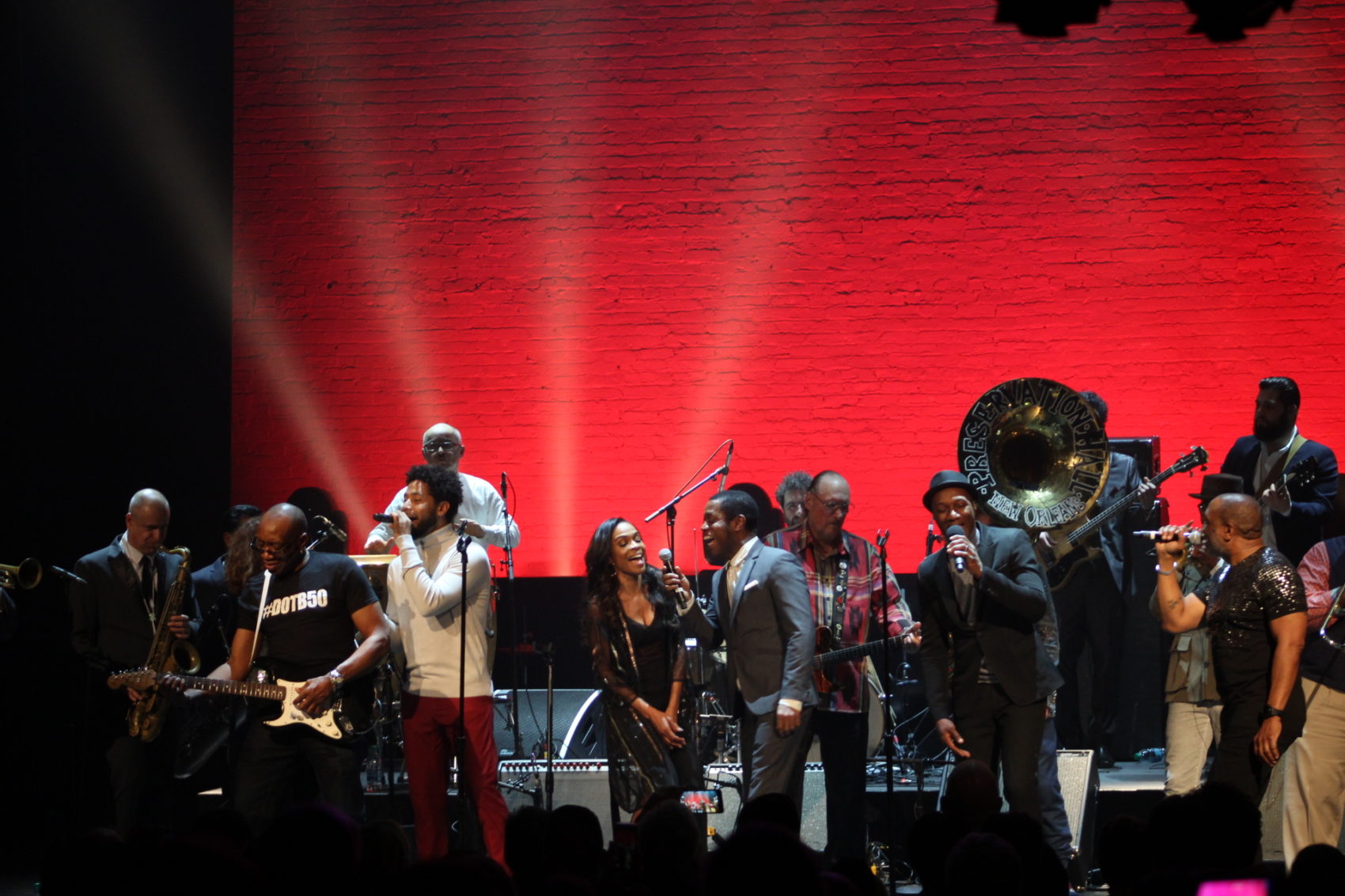 On Thursday at Harlem’s revered Apollo Theater in New York, more than a dozen music legends, rising stars and offspring of an R&B icon performed in one of the most hallowed spaces in music history to honor an anthemic song and the man who sang it: Otis Redding. Nearly 50 years ago, Redding’s “(Sittin’ On) The Dock of the Bay” was released four months after his death in an airplane crash into Lake Monona in Madison, Wisconsin. “An Evening of Respect: Celebrating Otis Redding” was held not only to honor the lasting endurance of his only top 10 Hit on the Billboard Hot 100, but also to affirm his legacy through raising funds for the Otis Redding Foundation in Macon, Georgia.

Produced by JAM Inc., Jonathan Shank for Red Light Management, the evening was simultaneously a raucous celebration as well as a somber reflection at the early loss of a widely beloved troubadour. The Otis Redding Foundation is an educational nonprofit that uses music to inspire and motivate youth intending to explore it as a career, or simply bring focus and purpose into their lives. “Respect” concerts honoring the organization’s namesake and generating funds began eight years ago primarily in Macon, Georgia — Redding’s hometown — and the foundation was started in 2007. One of his four children, Karla Redding-Andrews, is the executive director.

Varying in musical styles, ethnicities and gender, everyone recruited to appear at “An Evening of Respect” was firmly united in their appreciation of Otis Redding and his personal inspiration on their respective crafts. The youngest to perform, 21-year-old Marcus King was no less a devotee than his older counterparts. “Man, I’d come on a tricycle from Greenville [South Carolina] to do this,” he said, laughing over the telephone. “I knew Otis Redding’s music from the time I could walk. He was one of the many artists I heard on my father’s record player and my grandfather’s radio. His music grabbed me, and shook me. I could relate to him in how he released his energy through voice.”King, leader of his own eponymous band since the age of 15, describes his music as “psychedelic soul music, from the South,” and Thursday night was his first time playing the Apollo. “I feel nervous, terrified,” he admitted. “I guess any other adjective you can use to describe your heart rate being spiked is a good word.” 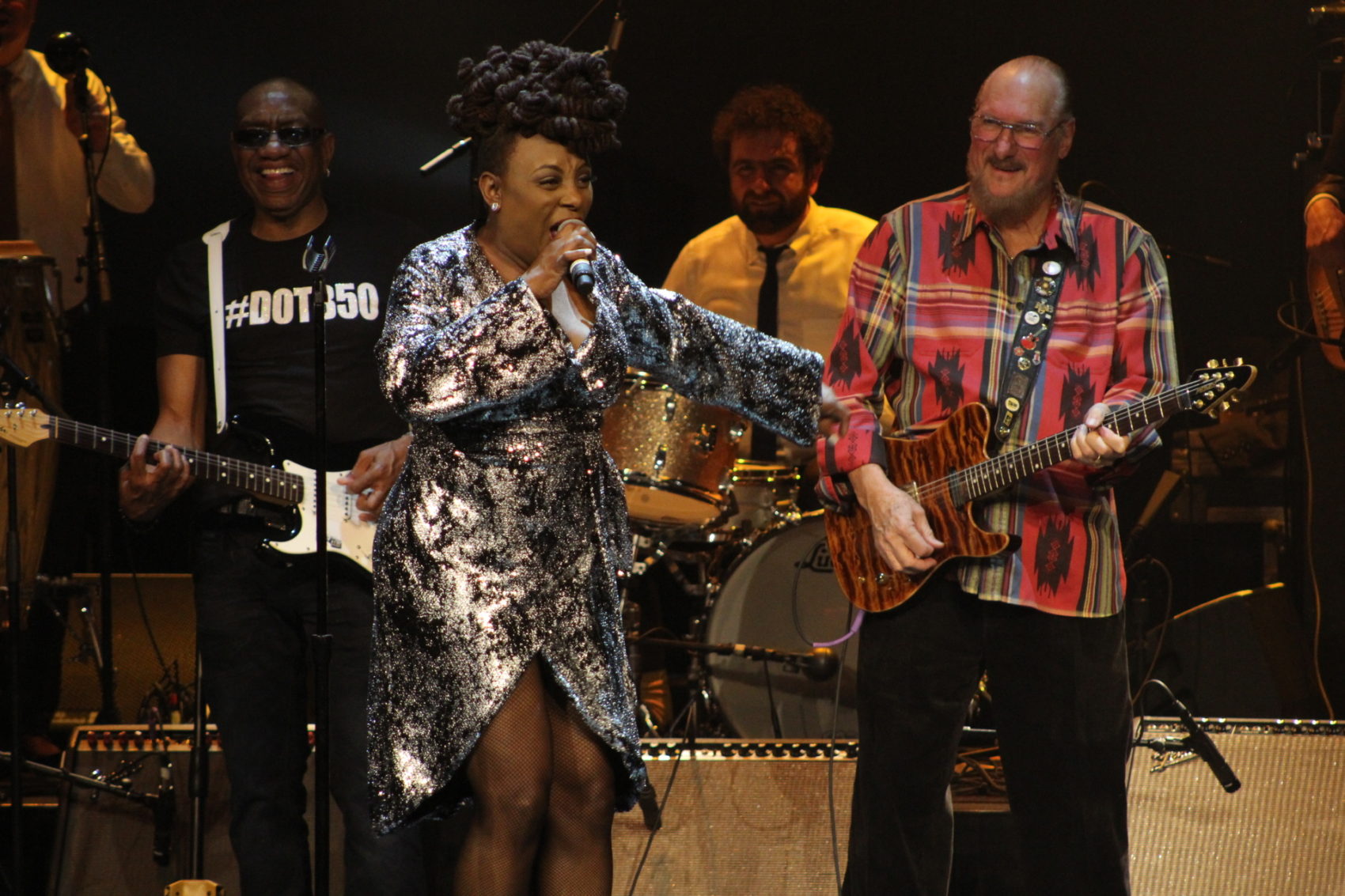 Ledisi belts out “Respect” accompanied by Otis Redding III, Steve Cropper, and the Dap Kings at the 2018 Evening of Respect

As the light slowly raised to illuminate the darkened main stage of the Apollo on Thursday evening, a near-capacity audience of anxious Baby Boomers feverishly clapped and hollered as the Preservation Hall Jazz Band’s horn section walked down the ground-floor aisles to ascend the stage performing “Second Line.” A pianist and drummer entered from behind the backstage curtains while the horn section took its place, stage right. “Let the people say amen!” shouted the gregarious trombonist, leading to a slow, mournful rendition of “This Little Light of Mine.”

With announced MC Whoopi Goldberg having called in sick with the flu, Karla Redding Andrews came out to welcome the audience and start the evening’s program. “We knew how much Macon, Georgia, loves Otis Redding, but it looks like New York City does too!” she gleefully screamed. “Tonight’s about holding on to legacy, our father’s legacy and making sure his dreams are still valuable. We promise tonight is going to be something special.”

Brooklyn’s own Dap-Kings, the evening’s house band, followed Preservation Hall, and the guitarist warned, “You enjoy your comfortable seats while you can!” before the band plunged into a hard-charging rendition of the Bar-Kays’ “Soulfinger.”

Over a succession of three songs, “Knock on Wood,” then “That’s How Strong My Love Is,” through “Shake,” two of Otis Redding’s sons — Dexter and Otis Redding III — and his nephew Mark Lockett channeled his physicality and, eerily, his voice with perfection, inspiring sections of the crown to begin dancing in the aisles or on their seats. Gray ponytails swayed, bald heads glistened with sweat, and couples snuggled as Otis Redding III repeatedly observed while playing guitar, “It’s getting’ funky in here! Oh, it’s gettin’ funky!”

Marcus King needn’t have been too nervous about performing, as his mentor and album collaborator Warren Haynes took the stage halfway through the show for a loose and bluesy version of “Hard to Handle.” Preceded by Nikka Costa and Paul Janeway of St. Paul and the Broken Bones, the legendary member of Allman Brothers Band and Government Mule was from the same Georgia town as Redding and had recorded a version of “I’ve been Loving You Too Long” more than a decade ago. “Otis may be my favorite singer,” he noted earlier in the week. “Great music stands the test of time, especially honest music that isn’t aspiring to be trendy. Otis’ music is timeless. For most of us, the show is kind of a reunion.”

For “Satisfaction” and “Can’t Turn You Loose,” King joined in with Haynes wearing a bold red suit and white hat while shredding his Gibson guitar and plaintively singing on “Loose.” It was a stunning battle of axes with the elder lion opposite the young cub trading guitar licks and turns singing solo.

Empire star Jussie Smollett added some Hollywood glitz, singing “Cigarettes & Coffee,” sitting on a stool at the center of the stage, wearing a white open-collared shirt and pink pants.

By the time Stax Records’ legends Steve Cropper and Booker T Jones of Booker T. and the MGs came out to join the Dap-Kings for “Green Onions” and “Hip Hugger,” the onlooking crowd at the Apollo was fully entranced and willing to do anything the artists asked of them. Destiny’s Child’s Michelle Williams gave an understated, heart-rending performance of “A Change Is Gonna Come,” lending it an immediacy and urgency felt by everyone listening.

As the evening winded down for the expected all-star rendition of “Dock of the Bay,” the majority of the invited musical guests slowly came on to back Dexter Redding and Aloe Blacc trading lyrics before a euphoric, near universally standing audience.

“I think every R&B singer who loves this genre has to make Otis Redding part of their handbook,” declared Ledisi, just prior to the show, in which she played an uplifting, declarative “Respect.” Nominated for three awards at Sunday’s Grammys, she hadn’t planned to be part of celebration but couldn’t say no when asked. “I performed in a ‘Respect’ concert three years ago in Macon after meeting one of his brothers,” she explained. “This is only my second or third time performing at the Apollo. I just hope that everyone who’s there, or not, recognized and honors him as a founder of R&B, feels his presence and shows love for his family. People need to remember him and what he did for music. I knew of him but didn’t really start listening to him until the ’90s. I was on a flight to perform in London and was listening to a live album, him performing ‘Try a Little Tenderness.’ Hearing the passionate expression of feelings, and coming from a man! It’s like, wow!”

Read the entire review at Billboard.