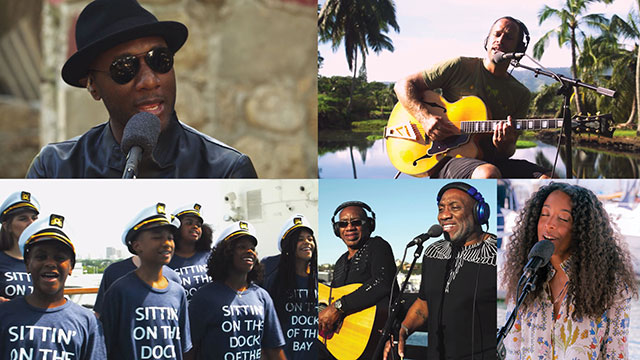 LOS ANGELES – Princess Cruises, Playing For Change, and the Estate of Otis Redding have teamed up to produce a new video to celebrate the 50th anniversary of Otis’ iconic hit “(Sittin’ On) The Dock of the Bay.” The newest addition to Playing For Change’s “Songs Around The World” series, the all-star track features Jack Johnson, Corinne Bailey Rae, Aloe Blacc, Dexter and Otis Redding III, James Gadson, Louis Mhlanga, the students from the Otis Redding Foundation Music Camp, Claire Finley, Irie Love, Sanchez, and the Rass Brass Extension.

Proceeds from the video, which will be available on YouTube and screened on board Princess Cruises’ fleet of cruise ships for a limited time, will benefit the Otis Redding Foundation and the Playing For Change Foundation. Both organizations support youth empowerment through music education.

“We are so thrilled to get to share the fruits of this partnership with the world,” says Zelma Redding, president of the Otis Redding Foundation, and widow of Otis Redding. “This was a wonderful way to
celebrate 50 years of “(Sittin’ On The) Dock Of The Bay,” and certainly an appropriate and heart-warming way to honor and remember the legacy of my husband.”


“This was also anincredible opportunity for our students to travel and experience what it islike to work in this aspect of the music industry and explore the innerworkings of a world-class cruise liner,” added Karla Redding-Andrews, vicepresident and executive director of the Otis Redding-Foundation, and daughterof Otis Redding. “I am also excited to have the work of the Otis Redding Foundation get new
exposure with the Playing For Change audience and Princess Cruise guests, and Ihope that our mission of empowering, enriching, and motivating all young peoplethrough programs involving music,
writing and instrumentation will resonate with all our new fans!”

“(Sittin’ On) The Dock of the Bay” was the 6th most played track of the 20th century. It is, without a doubt, one of the most beloved songs of all time, streamed over 200 million times. It was the first song in pop music history to reach #1 posthumously on the Billboard Hot 100 and R&B charts.

“It’s the honor of ourlives to collaborate with the Otis Redding Foundation to celebrate the 50th Anniversary of ‘(Sittin’ On) The Dock of the Bay.’ This song has no boundariesand lives forever in the hearts and souls of everyone who listens,” says Mark Johnson,co-founder of Playing For Change and the director of the video.

“(Sittin’ On) TheDock of the Bay” is one of the most requested songs by guests enjoying their vacation onboard Princess Cruises. This video celebrates music around the world and the inspirational power of our oceans — ideals that are important to us,” said Gordon Ho, Princess Cruises Chief Marketing Officer.“We’re especially delighted to support music education for youths, some of whom may perform one day on Princess ships.”

The release caps off abanner year for the song and for Otis Redding. The 50th Anniversary celebration launched in January with acelebrity-filled tribute show at the Apollo Theater during Grammy Week. The dayand date of the release was commemorated with a limited-edition gold 7” vinylrelease of the original single. It continued with the release of the Dock ofthe Bay Sessions, promoted by Rhino Entertainment, in May. Special, limited-edition merchandise was released throughout the year. The release of the “(Sittin’ On) The Dock of the Bay” Song Around TheWorld is the last gift closing out a monumental year recognizing theillustrious hit.